On Fragments of a Danse Macabre

Anne Collod runs a workshop on the notion of the alteration and decomposition of choreographic writing based on the score for Sigurd Leeder’s Danse Macabre (1935), whose reinterpretation is the basis of the show Le parlement des invisibles. The choreographic and pedagogic work Danse Macabre by Sigurd Leeder, a major figure in German dance, is a choreographic poem for 18 dancers lasting around ten minutes. Performed to the renowned and homonymous musical score by Camille Saint Saëns, the show creates twenty scenes in which hanged, wandering spirits, and beggars emerge from a cemetery at night in a grotesque and fantastical way. The choreography, recreated from the original Labanotation, creates a set of finely-drawn spatial and dynamic motifs, which are characteristic of Sigurd Leeder’s research into choreutics and eukinetics and which continued on from Rudolf Laban’s work. They are particularly well-suited to work by decomposition. By playing on the alterations and erasures produced by working on memory and forgetting, and the parameters of time, space, power and flow as defined by Laban, the participants allow the latent, invisible, and fictional dances set down in the score by Sigurd Leeder to emerge through an abundance of unique translations. 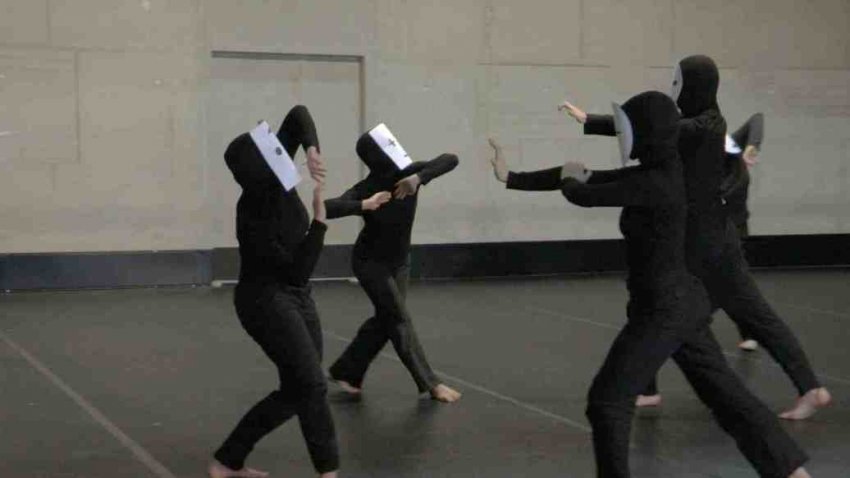 Each participant explores and extends the grotesque dimension of the dance of the dead by playing with the spatial organisation of the postures, the contrasting registers of tension, the high speed of execution, or conversely, extreme slowness.  By working on unique fantasies and different registers of tonus, ranging from the most taut to the most relaxed, differentiated bodily states emerge and specific futures can be explored: shadow futures, living/dead, object/bodies, animal, vegetable and mineral outcomes etc.  The composer Pierre-Yves Macé nourishes and supports the work with his own musical processes of decomposition and alteration.

Workshops given since 2012 to various audiences in France and internationally: